On the night of Saturday April 4th/5th we'll have the last chance to see a total lunar eclipse in New Zealand until 2018.

A lunar eclipse happens when the Earth lies directly between the Sun and the Moon, so the Moon is in our shadow. (Pro tip for Scrabble players: The lineup of three celestial objects is called "syzygy".)

The eclipse will start around 10 pm when the Moon first enters the Earth's partial shadow ("penumbra") but you won't see much then. As is usual with total lunar eclipses, the best part comes in the middle of the night when the Moon is fully in the darkest part of the shadow ("umbra").

For the April eclipse, the total part ("totality") is unusually short and will last less than seven minutes beginning at 12:56 am. Note that this is daylight savings time, which coincidentally ends during the final stage of the eclipse at 3 am.

During totality the Moon often turns a distinct red, popularly referred to as a "blood moon". This is due to Sunlight being filtered and refracted through the Earth's atmosphere. Exactly how red it will become depends on atmospheric conditions, so there's a large element of luck in determining how impressive it will be.

In Maori folklore a blood moon was seen as an omen. People would say "kua mate te marama (the moon died)". According to folklore Rona was a woman captured by the Moon, and during a blood moon she returns to earth to seek revenge on those who failed to save her.

Question: Which phase of the Moon is the only time that a lunar eclipse can occur, and why? The first 20 people to email the correct answer to info@spacecentre.nz go in the draw for a free family pass to Te Awamutu Space Centre. 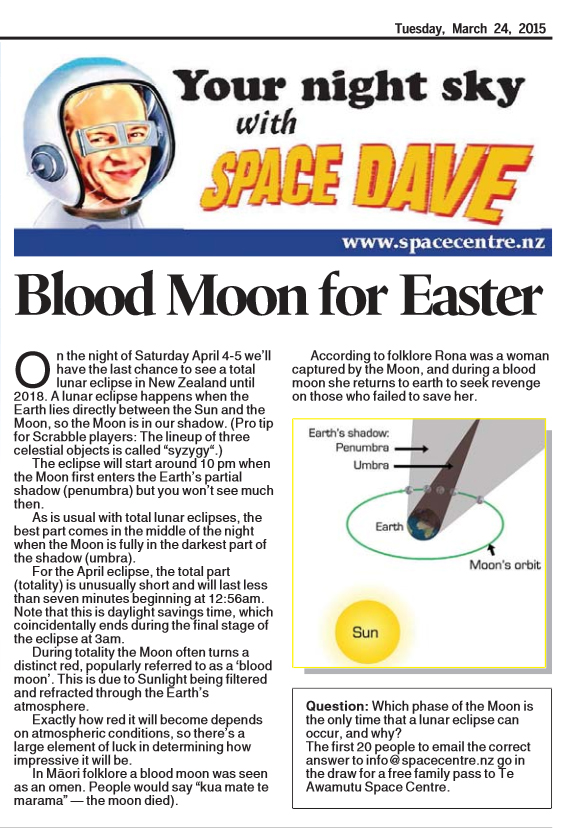