Exactly what is a constellation?

As we wait for the constellation Orion to move into our evening skies, it's a good time to think about exactly what a constellation is.

In common usage it means a group of stars, often in a pattern that looks like a person, animal or object. In ancient times that's exactly what constellations were but over time the definition has changed a bit. During the Renaissance there was a move to divide the entire sky into boundaried constellations so that every single celestial object would be within one of them. This made it much easier to name and record the positions of stars and planets.

In 1922 the International Astronomical Union (IAU) officially divided the sky into 88 areas based on historical western constellations. Twelve of these are in the zodiac but that's a topic we'll explore some other time.

When naming individual stars, the most common system is to use Greek letters to signify the star's brightness relative to others in its constellation. The brightest star in the constellation Centaurus is Alpha Centauri; the next brightest is Beta Centauri, then Gamma Centauri, etc.

Of course, we see the brightness and positions of these constellations in a way that is unique to Earth. Stars that are closer will generally be brighter, and stars that appear to be in a group may not actually be anywhere near each other in space (some will be relatively close to us while others are far away).

If you could travel to the stars and see constellations from different angles, they would make very different shapes. The illustration shows how the five brightest stars in the Southern Cross would be arranged as seen from a different solar system.

So the purpose of constellations is to form a map of the Universe as seen from Earth. It's helpful to be familiar with them if you want to find particular stars or objects such as comets or meteor showers. It's also nice when you see a news item about space and you recognize where in the sky they're talking about.

Bonus fact: Matariki is not a constellation, it's a star cluster located in Taurus. 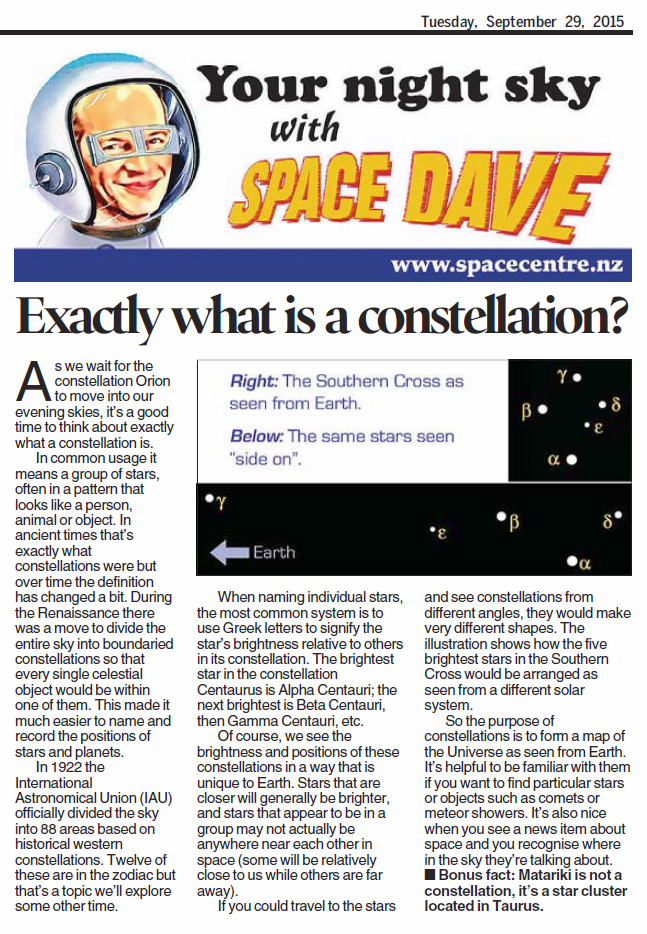