Giant star at heart of Scorpius

This month we're looking at the second of three easy constellations to learn: Scorpius.

One of the few constellations to actually look like its name, Scorpius includes many bright stars over quite a large area in the shape of a scorpion.

At the moment it's visible almost directly overhead in the early evening. Throughout the night it moves lower towards the western horizon, setting in the early morning.

Scorpius is a zodiac constellation, meaning that it lies in the distant background along the same plane as the planets' orbits around the Sun. As a result, we occasionally see planets pass "through" these constellations. In reality the planets are relatively close to us while the stars are very far away.

Right now Saturn happens to be visiting Scorpius. Saturn is a bright orange-yellow planet that will spend a few more months hovering around the scorpion's claws.

Scorpius also lies along the plane of our galaxy in the general direction of its centre. If you look near the end of the scorpion's tail, you're looking towards the middle of the Milky Way. You can't see the big central bulge of the galaxy due to interstellar dust, but it's there.

Within Scorpius the most obvious star is the red supergiant Antares, often referred to as "the heart of the scorpion". 550 light-years away, Antares is an enormous star 883 times the size of our Sun. If it was placed where our Sun is, the planet Earth would be inside it.

Scorpius is an important constellation to remember for the winter, so along with the Southern Cross you've got two constellations to identify at this time of year. The third easy constellation is Orion, which is more convenient to see in summer so we'll cover that one later.

In the meantime, practice finding Scorpius and the Southern Cross. The key is to do it regularly. Don't get frustrated if it seems harder than it should - it does get much easier the more you do it. 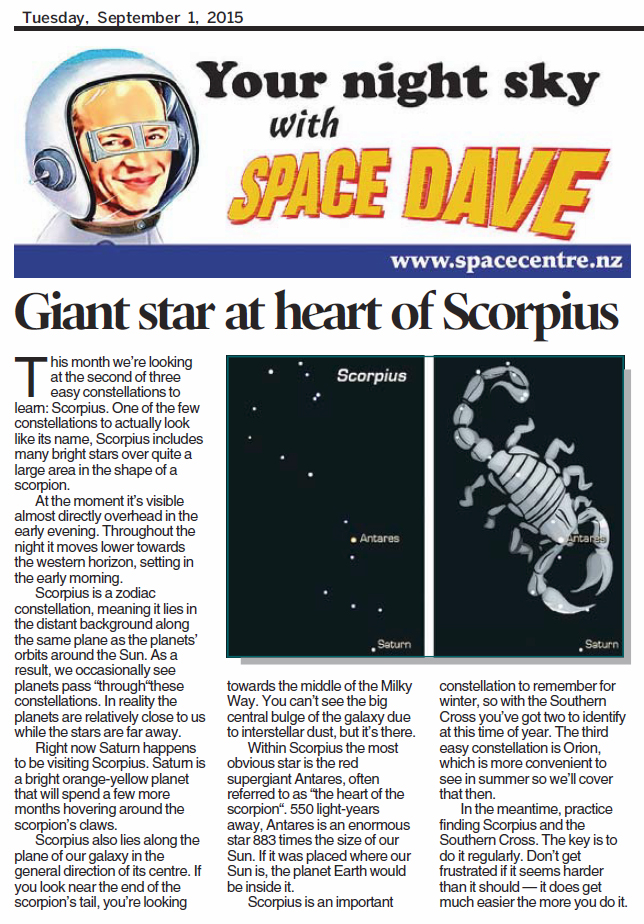