The constellation of Orion

This month we'll cover the last of three constellations I think everyone should know: Orion.

Previously we looked at the Southern Cross and the winter constellation Scorpio. Now we're saying goodbye to Scorpio as it sets lower each night in the south-west. Notice how the position of the nearby Southern Cross continues to change but it never sets below the horizon as Scorpio does; the Cross is in our sky all night, all year.

In the east the summer constellation Orion is rising earlier each evening. This easily-recognisable constellation, known to many as the Pot, is a favourite among star-gazers from beginner to professional.

The astronomical name refers to the Greek mythological hunter Orion. He's upside down for us in the Southern Hemisphere, so you have to imagine a man with his shoulders at the bottom (Bellatrix and Betelgeuse) and feet at the top (Rigel and Saiph). The three bright stars in the middle make up Orion's belt, the smaller group of three is his sword.

Rigel looks like a single star but it's actually a triple star system. It appears slightly blue because its primary star is a blue-white supergiant.

Betelgeuse is red because it's near the end of its life and has swelled into a red supergiant. Keep an eye on this one as it could explode as a supernova any time in the next 100,000 years. Don't worry, even if it happens tomorrow it won't hurt you, it will just become an extremely bright point of light.

In case you're wondering if Betelgeuse has already exploded and we just haven't seen it yet, the answer is probably not. It's only about 640 light-years away so in astronomical terms we're seeing it in close to real-time.

For astronomers, a highlight of Orion is the faint object in the middle of the sword. It's not a star, it's a nebula where new stars are being born. That's a whole column in itself, for another time. In the meantime if you have a telescope or binoculars, the Orion Nebula is an excellent beginner-level object to find and study. 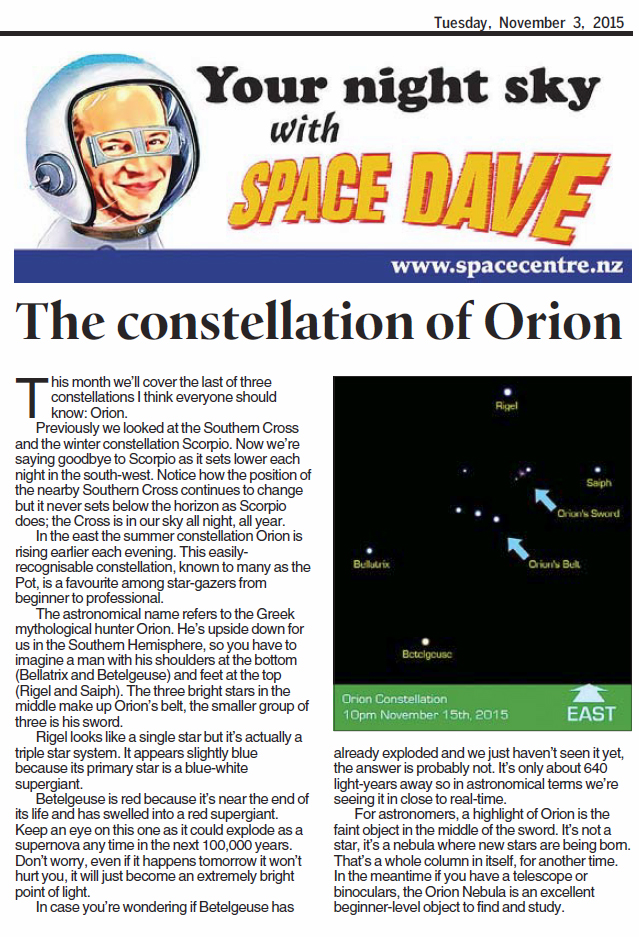