There's not a lot happening in the evening sky this month so let's take the chance to reflect on some of the top space news stories of 2015.

In March a robotic spacecraft called Dawn became the first to visit Ceres, the largest object in the asteroid belt. Dawn will spend a year studying the surface and chemical composition of this dwarf planet, teaching us much about how asteroids and planets form. Dawn will eventually run out of power but will continue to silently orbit Ceres for thousands of years.

The most famous dwarf planet, Pluto, was also visited for the first time in 2015. The photos and data that have been sent back so far are stunning, revealing a geologically active world with diverse terrain. This mission will allow scientists to keep on learning about Pluto and the outer Solar System for many years to come.

Mars has been in the news several times this year, most notably after liquid water was seen on its surface. While not being the evidence of alien life that many are hoping for, this discovery does have implications in the search for life as well as the possibility of humans visiting Mars in the future. Coincidentally, the excellent and very realistic movie The Martian was released around the same time.

Closer to home, New Zealand aerospace company Rocket Lab made headlines after landing a $6.9 million contract with NASA. Rocket Lab is poised to become a serious player in the space industry and make New Zealand one of only about a dozen countries able to launch rockets into orbit. However there is a caveat: The company has yet to record a single successful mission to space. In an industry where having a good track record is all-important, Rocket Lab has no history to speak of. It looks promising, but so have many aerospace companies that ultimately failed. I wish Rocket Lab all the best and I encourage everyone to follow them at www.rocketlabusa.com. 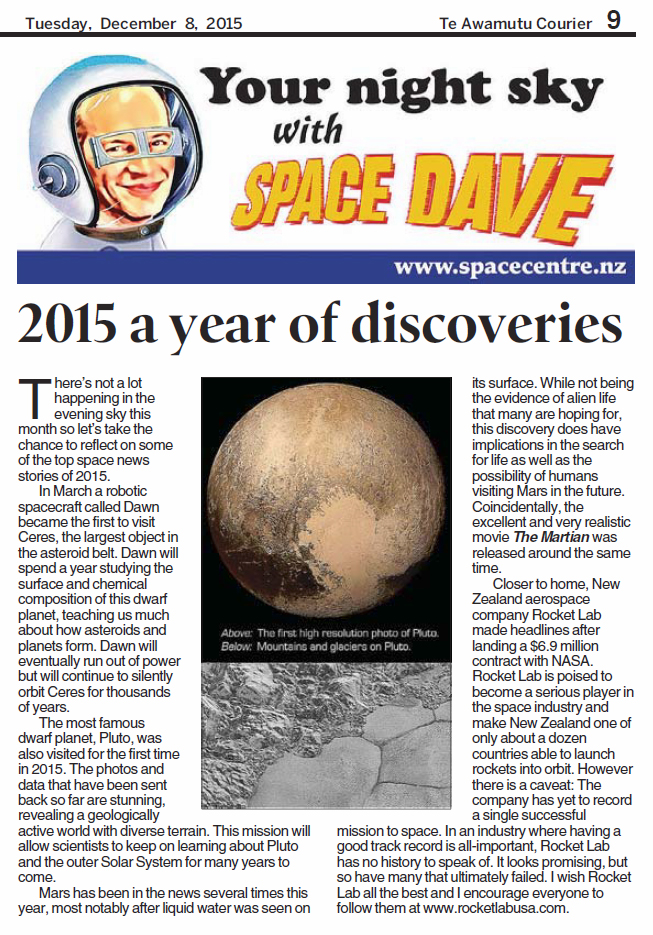