It's not often that we get to see five planets line up in the night sky. The last time it happened was in 2005.

This month you can see this spectacle but it does mean getting out of bed very early. From around 5 am, look near to the horizon in the east and you'll see the incredibly bright planet Venus.

Look to the north about halfway between the horizon and the zenith (overhead) to see the next brightest planet, Jupiter.

To the right of Jupiter you'll find Mars which may be noticeably red. Don't confuse it with similar-looking Antares, the red giant star that you may recall is at the heart of the constellation Scorpio.

Between Mars and Venus lies Saturn which may have a slightly orange hue.

Mercury is by far the hardest to spot. There's never an easy time to see Mercury because it's dim and always close to the Sun, but from the 8th February you'll get as good a chance as ever. Look below and to the right of Venus.

These five planets are the only ones we can see without the aid of a telescope. Uranus and Neptune are too dim, Pluto no longer counts and "Planet 9" may not even exist (more about that next month).

The fact that the planets are in a line is not unusual in itself. The major planets all orbit the Sun in approximately the same plane. We're inside the disk of the Solar System so everything else appears in a line surrounding Earth.

What's unusual about this month's event is that all of the "naked-eye" planets are visible at the same time. Usually at least one of them would be on the opposite side of the Earth or behind the Sun.

If you miss it this time there will be a similar alignment in August this year but it probably won't be quite as impressive, and the winter weather means there's less chance of seeing it at all. I recommend trying to see the current lineup if you can drag yourself out of bed. 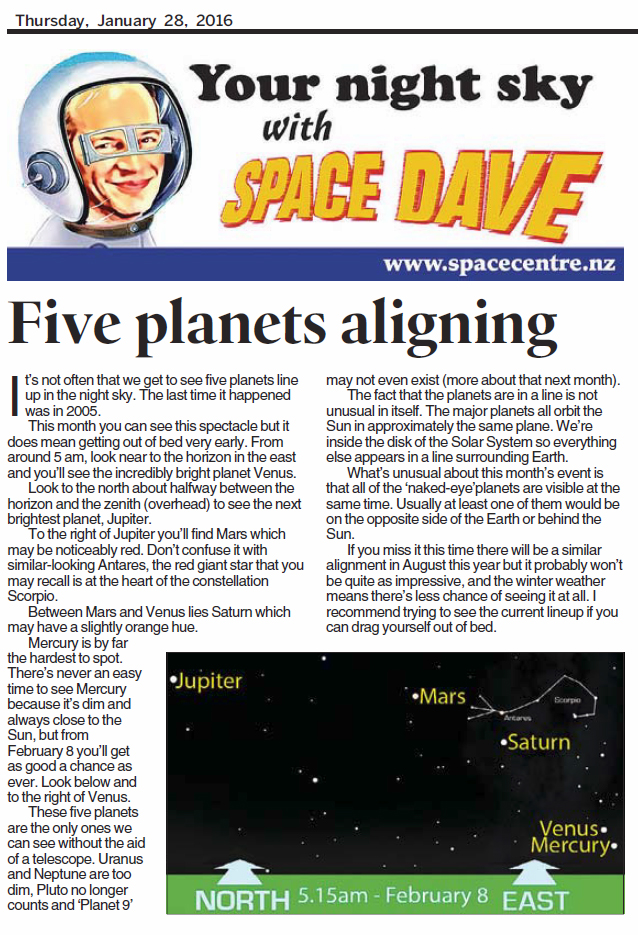