This month we're looking at another fairly easy constellation to find. Taurus takes its name from the Latin word for bull, and its distinctive v-shaped formation of stars make up the bull's face.

At this time of year the bull's head is on its side in the north-west sky during the evening, below the constellation Orion.

Taurus is a zodiac constellation, meaning that the Sun, Moon and planets of our Solar System occasionally pass in front of it.

It is one of the oldest named constellations with records going back to the early Bronze Age. It was an important marker in the ancient agricultural calendar, when it indicated the location of the Sun during the spring equinox.

This year on March 14th the Moon is right in the middle of Taurus, making it easy to find but hard to actually see. From then, each night the Moon moves farther to the east and Taurus will become more obvious.

Most of the stars in the v-shape are part of the Hyades, an "open cluster" of stars about 150 lightyears away. An open cluster is a group of stars that formed in the same place around the same time, in this case about 625 million years ago. The Hyades is the nearest open cluster to Earth and has been extensively studied.

At the top of the Hyades you can see the orange-tinted giant star Aldebaran. It's not actually part of the Hyades, it's about halfway between us and the open cluster.

Coincidentally, one of the next closest open clusters is Matariki, also located within Taurus. Notice its position below the Hyades and keep an eye on it throughout March. It sinks closer to the horizon each night until it disappears behind the Sun in April. When it emerges from behind the Sun it will be visible on the opposite horizon in the early morning. Remember the current layout so you can compare it to the way it will look in June when you'll be getting up at 6am to see it rise in the east. 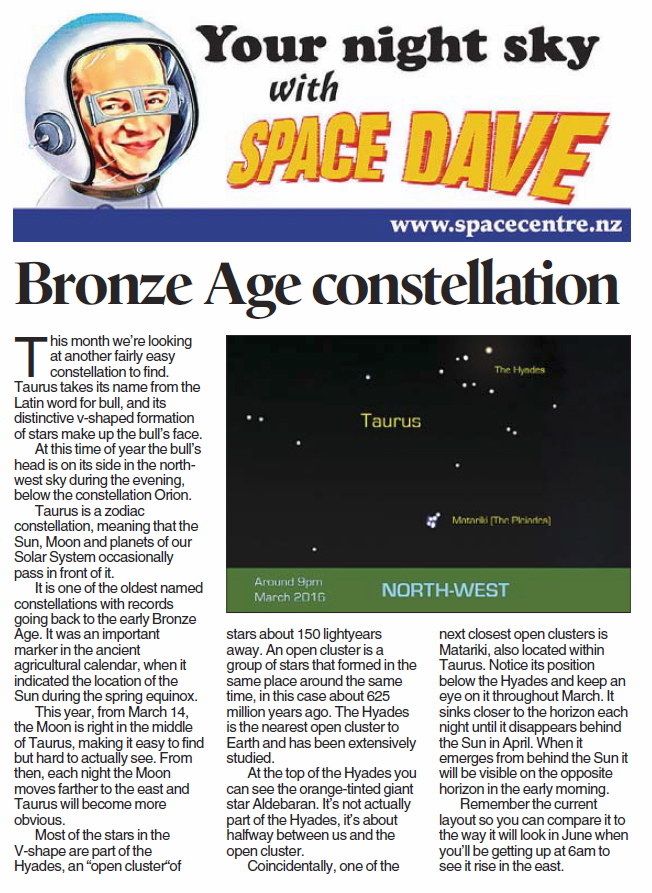