It's an exciting time for planetary scientists as a robotic spacecraft called Juno nears the end of its five-year, 2.8 billion kilometre journey to Jupiter.

In Roman mythology Juno was the wife of the god Jupiter. At one point Jupiter attempted to conceal himself in a layer of clouds to hide his mischief but Juno was able to see through this veil and uncover his true nature. Likewise, the robotic Juno hopes to see through the layers of clouds covering the planet and reveal the secrets within.

Juno will be only the second spacecraft to orbit Jupiter, after the Galileo probe which orbited from 1995–2003.

One of the most striking features of Juno is the huge array of solar panels, covering 60m2. Previous spacecraft have been unable to use solar power when visiting the outer planets because they are too far from the Sun. However recent advances in solar technology, driven in part by the space programme, have made it feasible.

The purpose of this mission is to learn more about the formation and structure of Jupiter and, by extension, the formation and history of the entire Solar System. Specific objectives include:
- Determine the abundance of water in the planet.
- Estimate the mass of Jupiter's core.
- Map Jupiter's gravitational and magnetic fields.
- Study atmospheric composition, temperature, structure, cloud opacity and dynamics.

As is typical with robotic spacecraft, the scientific studies are undertaken by a variety of instruments provided by different teams of scientists and engineers. Juno includes nine instruments with sciency-sounding names such as Jovian Energetic Particle Detector Instrument (JEDI).

Juno will arrive at Jupiter and begin its "orbit insertion" manoeuvre on July 5th at 2:30 pm NZST. It will then orbit the planet 37 times over 20 months. The radiation around Jupiter will eventually kill the robot, so before this happens Juno will self-destruct in a controlled fashion so as to prevent any possible contamination of Jupiter's Moons.

Also going down in this fiery death will be three Lego figurines that went along for the ride, representing Galileo and the gods Jupiter and Juno. 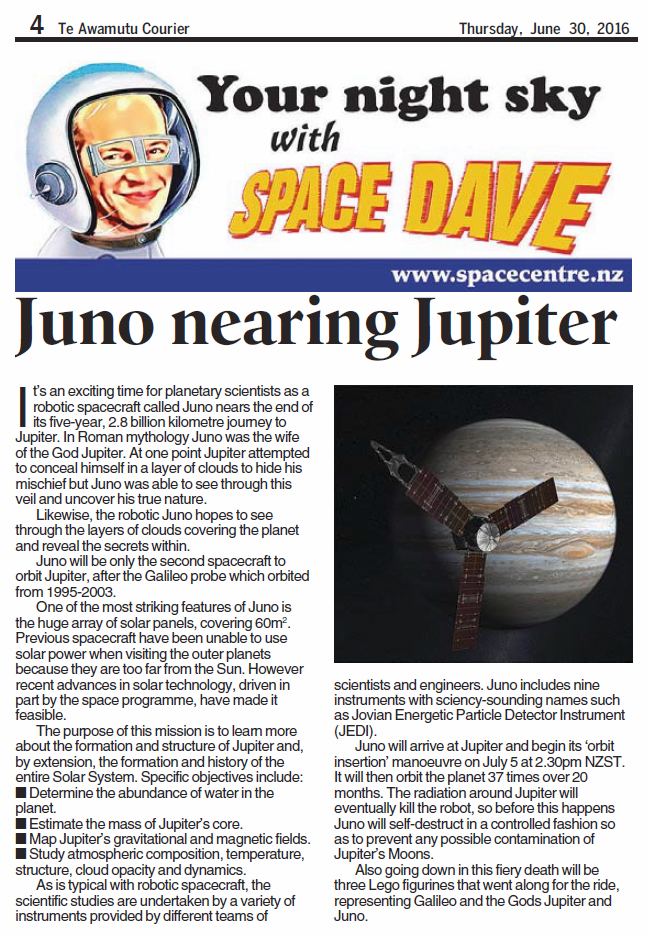