Is anybody out there?

Beyond our Solar System the nearest star is Alpha Centauri. The third brightest star in the night sky, we see it as one of the "pointers" near the Southern Cross.

It's not quite that simple though. The "star" is actually two stars orbiting each other so closely that they look like a single star. A backyard telescope can (just) separate them into two distinct points.

There's also a third star in this system, a red dwarf called Proxima Centauri. We're not completely sure that it's orbiting the other stars - it could just be passing by - but for now it is considered to be part of Alpha Centauri. It's shown in the graphic as a red dot but it's too dim to see with the naked eye. You'll need a telescope and some skill to find it.

Of the three stars, Proxima is closest to Earth.

Proxima is in the news because a planet has been discovered orbiting it. Dubbed "Proxima b", this is the nearest known planet outside our Solar system. We can't yet see the planet directly, it was discovered using a method that tracks the movements of the star. Any images you've seen of the planet are artist impressions.

Although we currently lack the technology to send spacecraft to other stars, Proxima is close enough that it's feasible to study with telescopes and perhaps eventually visit.

Even more exciting, Proxima b is a "terrestrial" planet. This is often reported as "Earth-like" but that's not very accurate - terrestrial simply means it has a solid surface and is located in a region that isn't outrageously hot or cold. It doesn't necessarily mean it's a nice place for a holiday. Venus is a terrestrial planet but it would kill you in half a dozen ways simultaneously.

Could Proxima b support life? It's possible but there are problems. For example, it's very close to its star and red dwarfs are violently unstable. I wouldn't bet on finding life there but there's no harm in being optimistic.

In the meantime you can look towards Proxima and imagine what our interstellar neighbour might be like. 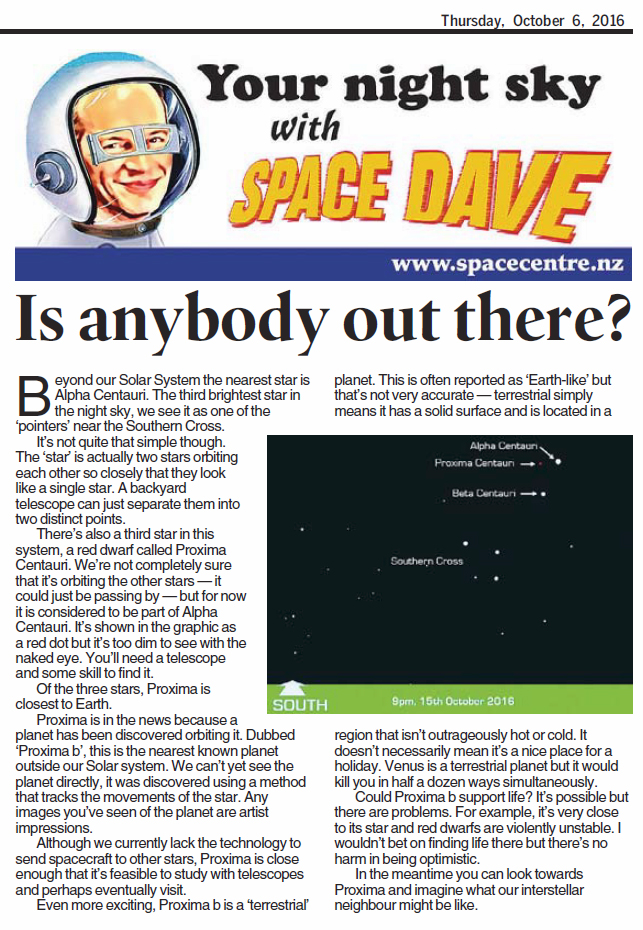