How to find Matariki in Summer

December isn't normally when we think about Matariki but it's actually a good time to start following this beautiful star cluster.

We associate Matariki with the Maori New year in June when it rises in the eastern sky at dawn. However the stars of Matariki are visible for most of the year. In the months following June it appears earlier each morning. By October it rises around midnight and by December it rises around 8 pm, finally becoming a convenient evening sight in Summer.

Of course the main inconvenience of Summer stargazing is that it gets dark so late. Around the Summer solstice (December 21st) you won't see much before 10 pm. Because Matariki isn't very bright you need a reasonably dark sky to see it. You'll also want a viewing spot away from direct lights - even blocking street lights with your arms helps a lot.

Later in the night these positions change. Orion gets higher in the sky and the line through Aldebaran to Matariki points down instead of parallel to the horizon. The relative positions of the stars are the same but the whole view seems to be rotating. I recommend that you get out several times in the same evening to see how this movement works. The more often you can see the same constellations at different times, the easier it becomes to find them.

After the solstice it gets easier to see Matariki as it gets dark earlier. You can follow it as it slowly inches westward until late March. At this time it will be "catching up" to the Sun, going behind the Sun and then overtaking it in June. This completes the annual cycle and begins a new year. 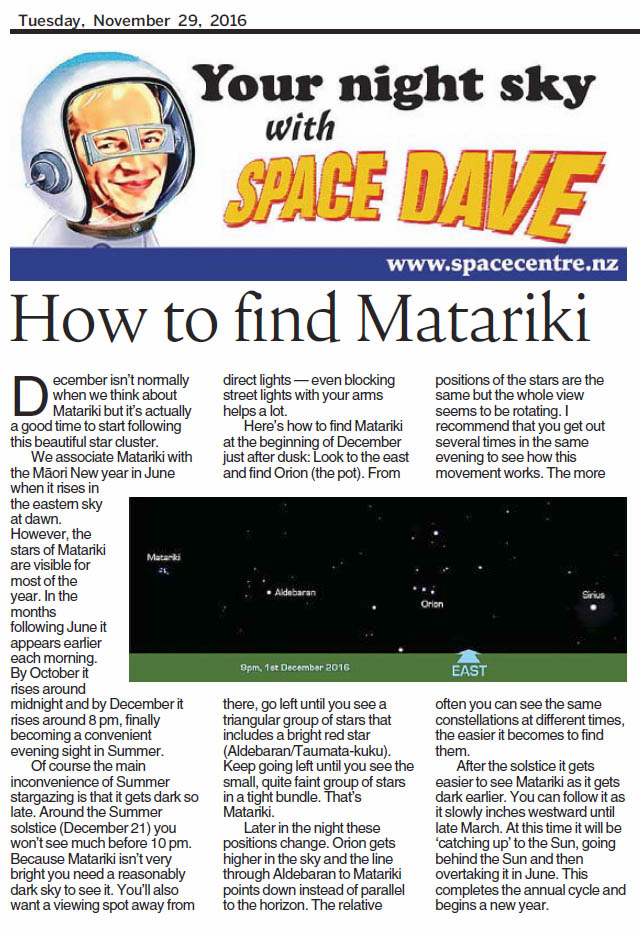