Venus lighting up the sky

This Summer I've had a lot of calls regarding the mysterious bright object hanging over the evening sky in the west. Too bright to be a star, it appears before it's even dark. If you're one of the many folks concerned about aliens or shadowy organisations with advanced technology, you can now relax.

The object is the planet Venus.

Due to its position relative to the Sun and Earth it appears unusually large and bright at the moment. In fact it looks so unnatural that when Venus is in this position it's a common source of UFO reports.

Venus is always a bright object in our sky for two reasons: It's one of the closest planets and it's covered in very reflective clouds. Think about how reflective the Moon is (moonlight is reflected sunlight). Venus is seven times as reflective as the Moon.

Venus is currently even brighter than normal due to a combination of its position and phase.

Its position is approaching its closest point to Earth, so Venus appears larger.

"Phase" refers to how much of the planet we can actually see versus how much is dark, similar to the phases of the Moon. As you can see in the image, Venus is in a crescent phase so we can see about a quarter of the side facing us.

Why is it so bright during the crescent phase - wouldn't it be brightest during its full phase when we can see the whole face? That would be true but Venus is only ever full when it's on the other side of the Sun and farthest from us. It's brightest when it's both close enough to look big and visible enough to reflect a decent amount of light.

The brightest night will be on February 17th. However Venus is also setting earlier, making it more difficult to spot. It will be gone from our evening skies by March.

While you're looking at Venus you should also be able to spot Mars. It's much fainter but identifiable by its redness. 2017 ins't a great year for looking at Mars - we'll need to wait until 2018 for that. 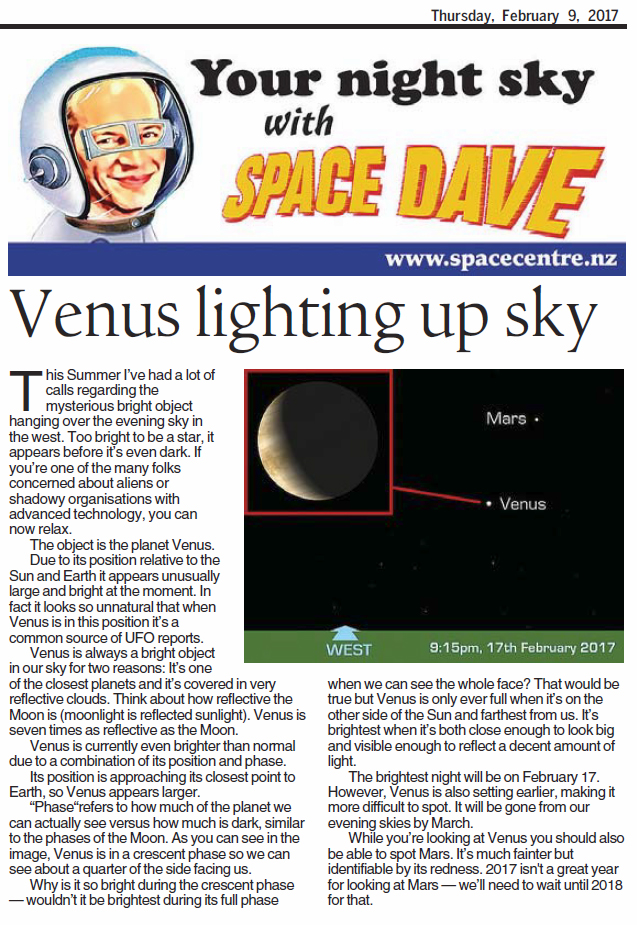