This month's big news is the discovery of seven potentially habitable planets about 40 lightyears away. This is relatively close although the Space Shuttle travelling at 28,160 km/h would still take 1.5 million years to get there.

Our Solar System consists of eight planets (that we know of) and a bunch of smaller objects orbiting our star, the Sun. The new planets are part of a different solar system; they orbit a star called TRAPPIST-1.

Our Sun is a yellow/white star 1.4 million km in diameter. TRAPPIST-1 is a red dwarf star, much dimmer and about 1/10 the size of the Sun. This wouldn't provide enough heat for life on Earth but TRAPPIST-1's planets orbit much closer to their star so they end up with a similar amount of heat and light.

TRAPPIST-1 is in the constellation Aquarius but we can't see it with the naked eye. It's currently in the same line of sight as the Sun, and in any case red dwarfs are too faint to see without a very powerful telescope.

TRAPPIST-1 is especially interesting for alien-hunters. Red dwarfs are the most common type of star in the galaxy. Finding seven potentially habitable planets orbiting a nearby red dwarf dramatically increases the odds of finding many more beyond. Red dwarfs are also very long-lived and remain stable for trillions of years, allowing much more time to develop life than other types of star.

If there is life in this system, could we find it? Maybe. The most promising search technique is to analyse the planets' atmospheres for "biosignatures". That's a bit too difficult for now but the next generation of telescopes will be able to do it. If there's life around TRAPPIST-1 we could find evidence of it within a decade. 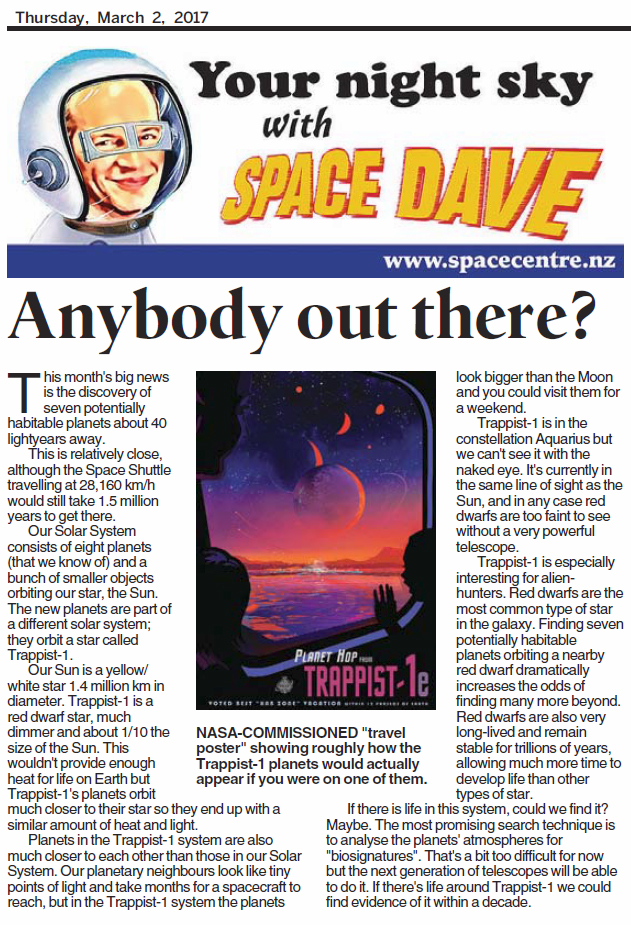