If you've been following this column you should be familiar with the constellation Orion, currently in the north-west evening sky.

Now let's move up and to the right a little and look for the brightest star in the entire Earth's night sky. It's called Sirius, from the Greek word for "glowing". It's often referred to as the Dog Star, the main star in the constellation Canis Major (large dog).

Although it is an intrinsically bright star, its apparent brightness is mostly due to being relatively close at 8.6 lightyears.

The human eye sees Sirius as a single star but it's actually a binary system - two stars orbiting each other every 50 years. The distance between them is about twenty times the distance between Earth and the Sun. The larger star, Sirius A, is about twice the mass of our Sun and more than twenty times as luminous. Its companion star, Sirius B, was once the larger of the pair but is now a much smaller and dimmer white dwarf.

Sirius is gradually moving towards us and will get slowly brighter until it reaches its closest point in about 60,000 years. It will then continue past and get dimmer as it heads away. However it will remain the brightest star in our night sky for about 210,000 years.

Sirius has played an important role in many cultures and is prominent in the very earliest astronomical records. In ancient Egypt, for example, it was used to herald the Summer solstice and annual flooding of the Nile.

Bright stars are important to ocean navigators and Sirius would have been especially useful for Polynesians travelling between Pacific islands. Maori names for Sirius include Takarua and Rehua.

Sirius is one of the few astronomical objects that can be seen during daytime. However this is only possible under specific conditions - don't bother trying it casually during your lunch break.

The Voyager 2 robotic spacecraft is currently heading out of our Solar System in the general direction of Sirius and will make its closest approach to the star in just under 300,000 years. 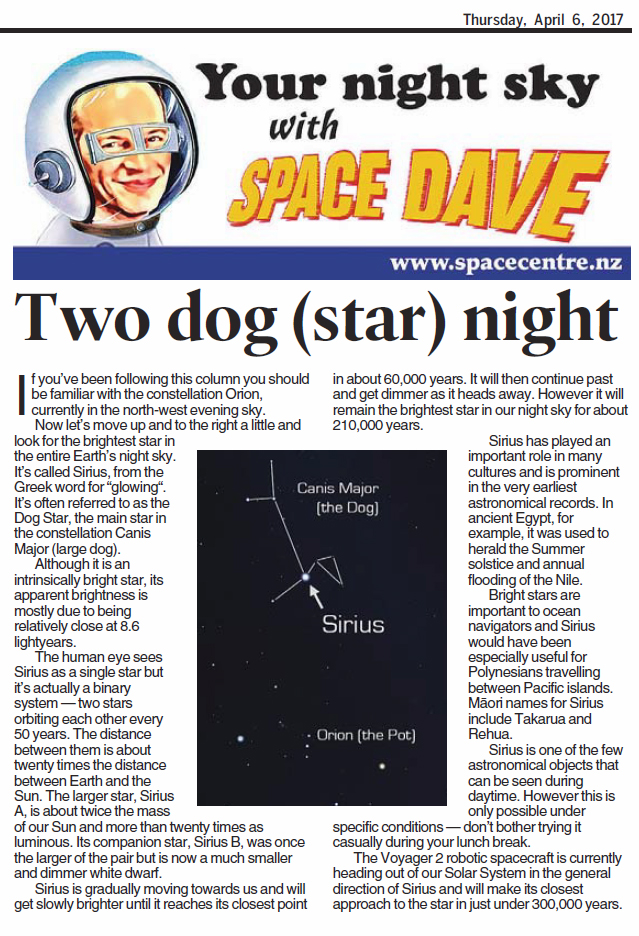