Did Buzz Aldrin admit the Moon landings were faked?

Long Answer: Over the years there have been numerous stories about astronaut Buzz Aldrin admitting that he never went to the Moon. Most of the stories are openly fake and not intended to be taken seriously, some are quotes taken out of context, some are outright lies.

In reality Buzz Aldrin has never wavered in his account of the historic Moon landing with Neil Armstrong and Michael Collins.

Example One: In November 2014 the spoof website Huzlers published an article with the following (fake) quote from Buzz Aldrin:

"I am ashamed to say this but I cannot hide it anymore, it was a setup, like the ones they use in Hollywood films, back in the 60’s, the U.S. was competing with the Soviet Union to achieve space flight supremacy, which was known as the space race. We were afraid the Soviets would beat us to the moon so we decided to fake the moon landings of Apollo 11..."

This was simply fake news. For more info, see snopes.com/fact-check/moony-tunes. 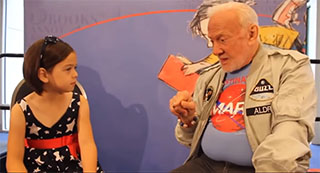 Example Two: In July 2018, a video1 became popular that showed Buzz Aldrin apparently confessing to an eight-year old girl that "we never went there". Taken out of context it appeared that Buzz had finally admitted that the conspiracy theorists were right and the Moon landings were faked.

However, the context of both the question and answer clearly show that Buzz was talking about why we've never been back to the Moon, not about whether he went there in the first place.

Watch the whole video and other videos of Buzz around the same time. He's elderly. His sentences don't flow as easily and precisely as they once did. He frequently misses words or struggles to find the right ones.

When Buzz said "we never went there", he was saying "we never went back". If he'd meant that he'd literally never been there at all, the rest of his response wouldn't even make sense. Here's the actual question and answer:

Girl: "Why has nobody been to the Moon in such a long time?"

Buzz: "That's not an eight-year-old's question. That's my question. I want to know, but I think I know. Because we didn't go there and that's the way it happened, and if it didn't happen it's nice to know why it didn't happen, so in the future if we want to keep doing something, we need to know why something stopped in the past that we wanted to keep it going. Money is a good thing. If you want to buy new things, new rockets, instead of keep doing the same thing over, then it's gonna cost more money. And other things need more money too. So having achieved what the president wanted us to do, and then what thousands, millions of people in America, and millions of people around the world... You know when we toured around the world after we came back, the most fascinating observation was signs that said 'We did it'. Not just us. But we, the world. They felt like they were part of what we were able to do. And that made us feel very good."

This is the same speech that Buzz has been giving for years, i.e. He questions why we're not making more effort to get back to the Moon, but he acknowledges that money is a big hurdle. As you can see in the video and transcript, he can't put it into words as well as he used to, but the message is clearly the same.

>> Back to the Moon Hoax FAQ

1. The video was recorded during the 2015 National Book Fest at the Walter E. Washington Convention Center in Washington D.C.