Hopefully you've seen the early morning lineup of planets discussed in last month's column. If not, you can keep trying until about the end of February.

Last month I also mentioned the possible discovery of a new planet known as Planet X or Planet 9. So what's the story? Is it real?

Maybe. No one has actually claimed to have found a new planet, but there is something strange happening in the outer Solar System that suggests it could exist.

Astronomers noticed a bunch of small dwarf planets that have orbits aligned in a way that seems too coincidental to be random chance. Researchers Konstantin Batygin and Mike Brown investigated, and realised the best explanation would be the gravitational effect of an undiscovered planet about ten times the mass of Earth.

If it exists, it would be much farther away than the main planets we're familiar with. It would probably lie somewhere in the constellations Orion or Taurus, but it would be 600 times fainter than Pluto so you'd need a fairly powerful telescope to see it. In fact that's the next step - astronomers around the world are on the case trying to observe it.

There have been previous claims about new planets but none have been convincing. Even this new claim is extraordinary and my first reaction was to doubt it. However it is intriguing. Mike Brown is an exceptional astronomer who has studied the outer Solar System for many years, and he's made the best case for a new planet I've ever seen. At this stage it's too close to call, but if pushed I'd lean slightly towards predicting that Planet 9 will eventually be found.

You may wonder if this is related to the mythical Planet X, AKA Nibiru, that is claimed to have been known to the ancients. Some people believe Nibiru's orbit brings it into the inner Solar System every few thousand years causing mass extinction events on Earth. However this is not plausible. There are plenty of ways the Universe is trying to kill you but Nibiru isn't one of them. 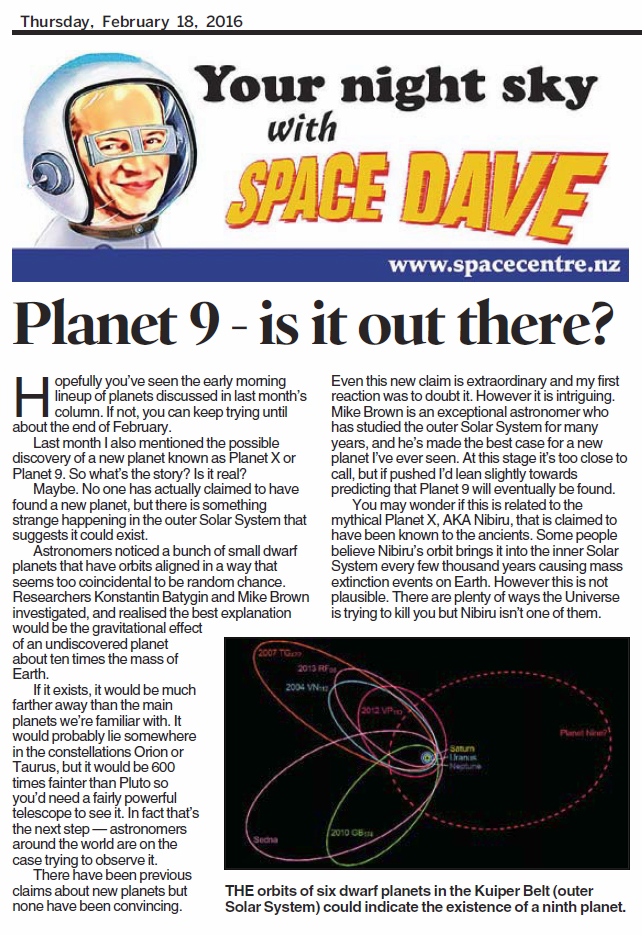