Throughout the night, stars and planets appear to move slowly across the sky towards the west. If you've never noticed this, pick a bright star and line it up with some earthly landmark, then come back half an hour later to see how far the star has moved.

What you're seeing is not actually the stars moving, it's us. Earth is constantly rotating towards the east, making it seem like the stars, planets, Moon and Sun are all moving west. After about 24 hours, the Earth has rotated once and the sky appears roughly the same as it was the same time yesterday.

Not exactly the same though. On top of the 24-hour cycle there is a more subtle change happening. Each day the Sun, stars and planets rise in the east and set in the west about four minutes earlier.

Throughout the year this results in complete changes in the stars and planets we can see.

Back in January we saw the five "naked-eye" planets lined up in the early morning sky. Planets move in a more complicated way than the stars but Mars, Jupiter and Saturn have been generally following the same pattern of rising earlier and moving west. They now are visible much earlier, in the evening sky.

Jupiter is very bight in the north. On May 19th it will appear very close to the quarter Moon.

Mars and Saturn are further to the east, fairly close together. Mars is in Scorpius, travelling through the scorpion's claws. Saturn follows behind and below. The Moon will be in the same area from May 20th to 23rd, making a notable formation along with the red supergiant star Antares.

On May 22nd Mars is "in opposition". This means the Sun, Earth and Mars are in a straight line with Earth the middle. The Sun and Mars are on opposite sides of us. At this time Mars appears at its biggest and brightest.

One other thing you may hear about this month is the transit of Mercury on May 9th. Unfortunately it's not visible from New Zealand - we'll have to wait until 2032 for one that we can see. 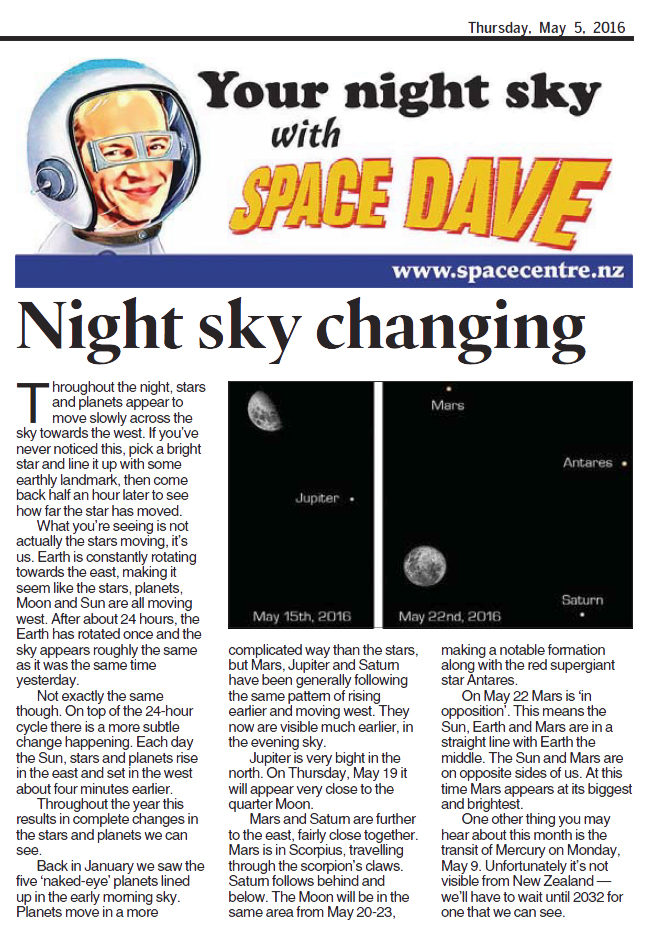