Now is a good time to talk about the Solar System's biggest planet. Jupiter is very bright during the evening in the northern sky. On the 11th June you'll see the Moon just to the left of Jupiter. The next night the Moon will have moved to the other side, giving a good demonstration of how far it moves in relation to the stars and planets every 24 hours.

Here are a few interesting facts about Jupiter:

It's the fastest spinning planet in the Solar System, meaning that it has the shortest day (the time it takes a planet to rotate once on its axis is one day for that planet). Earth takes 24 hours to rotate once but Jupiter, despite being much larger, takes only ten hours. It's spinning so fast that it bulges out quite a bit around its equator.

Jupiter's gravity is 2.5 times stronger than Earth's. This would be uncomfortable but, contrary to what you read in many science fiction stories, nowhere near enough to crush you.

Of course you can't actually stand on the surface of Jupiter because it's a gas giant planet with no solid surface. You'd sink into it until the gas becomes so dense that you stop sinking any further and just stay floating at that depth.

Jupiter has rings, similar to Saturn's but much thinner and fainter.

Jupiter has the strongest magnetic field in the Solar System, so your compass would work very well.

Jupiter has been visited by eight robotic spacecraft, the first in 1973 and the last in 2007. Most of these robots flew straight past Jupiter but one, called Galileo, orbited for eight years before crashing into the planet's violent atmosphere.

And that brings us to an exciting teaser: Early in July another spacecraft will arrive at Jupiter. We'll talk about that in the next column.

Before we go, a quick update on the BEAM module I talked about in April. BEAM has been successfully installed at the space station and inflated. Leak checks will happen over the next week before the first astronaut enters. 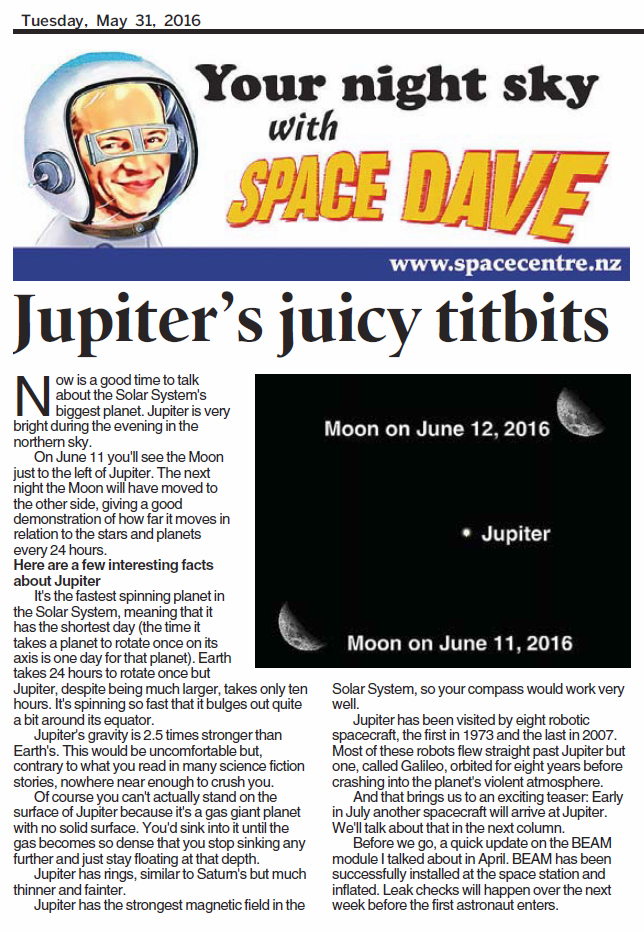