Back in January we were treated to a rare lineup of all five "naked-eye visible" planets in the early morning sky. If you missed that event there's a slightly less spectacular but somewhat more convenient opportunity this month. The planets won't all line up in the same way but there are several interesting ways they'll move around and come close to each other (from our point of view, not actually close to each other in space).

Saturn and Mars are fairly near each other all month - the two brightest objects almost directly overhead. Saturn is the one farthest east until around the 24th when it overtakes Mars and becomes closer to the west. At the same time Mars and Saturn make a line with the red giant star Antares.

Jupiter is getting closer to the western horizon each evening and will be almost out of sight by the end of the month.

Mercury and Venus, meanwhile, are both rising higher in the western sky each evening. Being closer to the Sun than Earth, they never get very far away from the sunset (or sunrise) and can't ever be seen as high in the night sky as the other planets. Venus keeps getting higher until December but Mercury will already be sinking again by the end of August. Remember that while Venus is very bright and easy to see, Mercury is faint and more difficult to find.

Perhaps the best event of the month will be the conjunction of Jupiter and Venus on the 28th. These two planets will be so close to each other that you can see both of them together through a backyard telescope. It's not often that you can see two planets at once in the narrow field of view of a telescope so it's a good time to pull that unused scope out of the wardrobe and give it a try. Even binoculars would be worth a go. You'll need to be organised early though as they'll be visible as soon as it gets dark, then set quickly and be gone shortly after 7:30 pm. 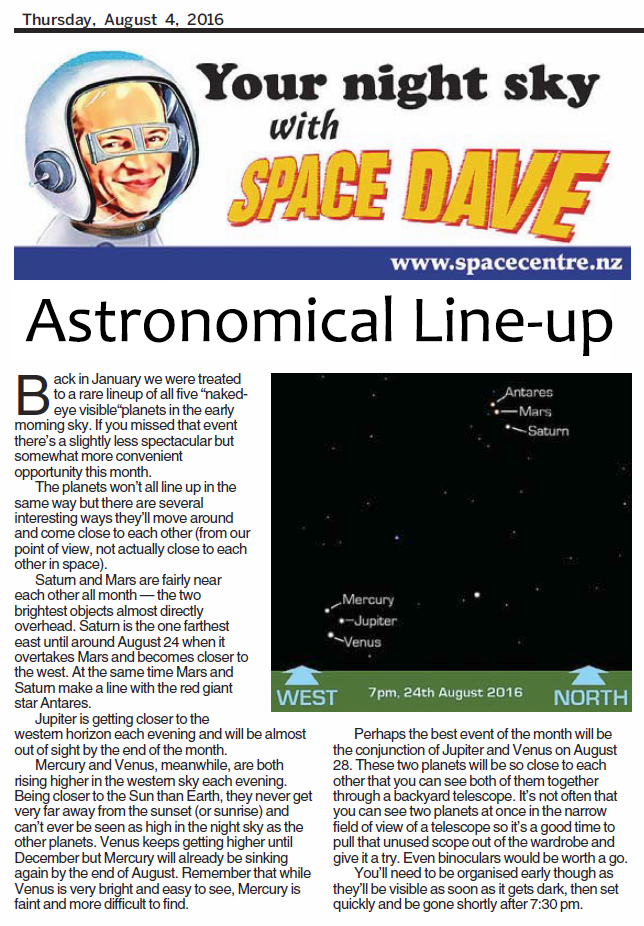