Hopefully you managed to see some of the "dance of the planets" during August. Perhaps you also noticed that it's quite a challenge keeping up with the way planets move around. Fortunately there are software tools available to help, and it's surprisingly easy to use them.

The program I use most often is a free desktop app called Stellarium. After installing and setting up for your location, it's as easy as clicking and dragging your mouse around to see what's in the sky. Use the time controls to see what's going to be visible at any point in the future. Use the graphic overlays to see the shapes of constellations. Zoom in for close-up views of planets, nebulae and galaxies. There's even an option to use Maori names for stars. Download the app at www.stellarium.org.

For your smartphone there are dozens of astronomy apps and it can be a bit confusing trying to figure out which one(s) to use. I don't recommend any particular one because it depends on the capabilities of your phone as well as your personal needs and preferences. The best approach is to go to your app store and search for astronomy apps, then start trying the ones with free or cheap versions. In most cases you'll only need the most basic version of an app - the advanced or "pro" versions tend to include features you won't ever use (e.g. additional star catalogues). You'll probably need to try a few before settling on one you like.

One of the most impressive and popular features of phone/tablet apps is the ability to point your device at the sky to identify objects. Want to know what that unusually bright star is? Point your phone at it and you'll see its name along with additional information. Honestly, you'll love having this ability on your phone and it's worth having an astronomy app just for this feature.

Some excellent objects to try this on during September are Mars and Saturn. As discussed last month they are passing through Scorpius, making a fine sight with the red star Antares. 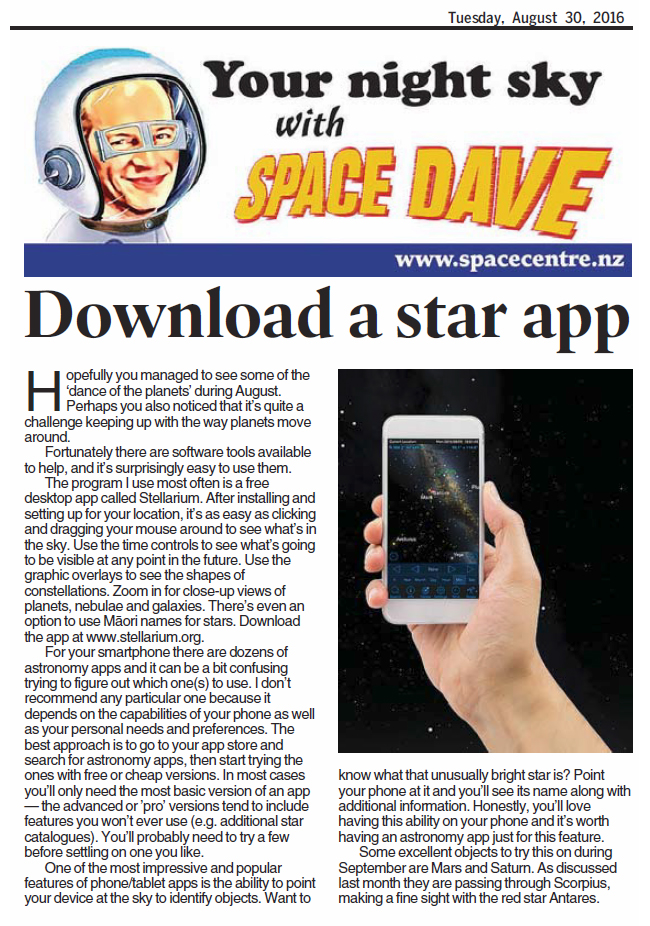