In a previous column we talked about finding Matariki by drawing a line from Orion (the Pot) through a triangular group of stars to the small "open cluster" known as the Pleiades (Matariki).

Now let's take a closer look at that triangular group in the middle. Coincidentally it's another open cluster, meaning a group of stars that were formed together in the same place and time.

The cluster is called the Hyades, named after the mythological Greek sisterhood of nymphs that bring rain. The Hyades were daughters of Atlas and sisters to the Pleiades and the Hesperides.

The Hyades consists of several hundred stars about 153 lightyears away that were born around 625 million years ago. This is fairly recent in astronomical terms so the stars are relatively young. The cluster is slowly dispersing and its stars will eventually all head out on their own into the wider galaxy.

On a dark night you can see about a dozen of these stars with the unaided eye and about three times that many with a pair of binoculars.

The brightest stars in the Hyades form a triangle that includes the red giant Aldebaran. It's obvious which is Aldebaran - it's brighter than the others and noticeably red. However it's not actually part of the main cluster - it's much closer to Earth and just happens to be in the same line of sight.

There are about a dozen open clusters that you can see with the naked eye but few are as visually striking as the Hyades or Pleiades. That's because they are the closest and third-closest open clusters to our Solar System respectively. It's a fluke that they happen to be so close to each other in our sky. 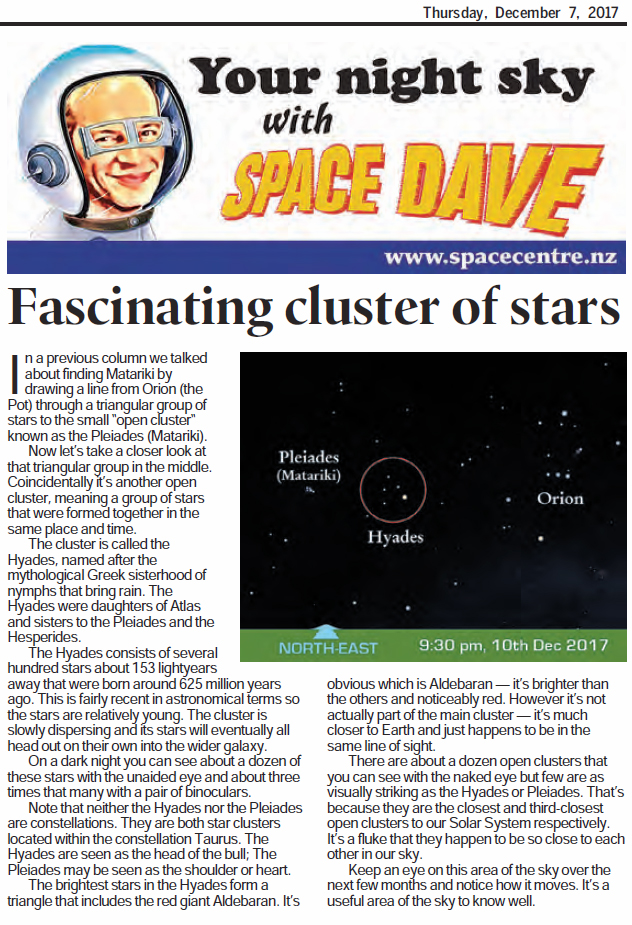